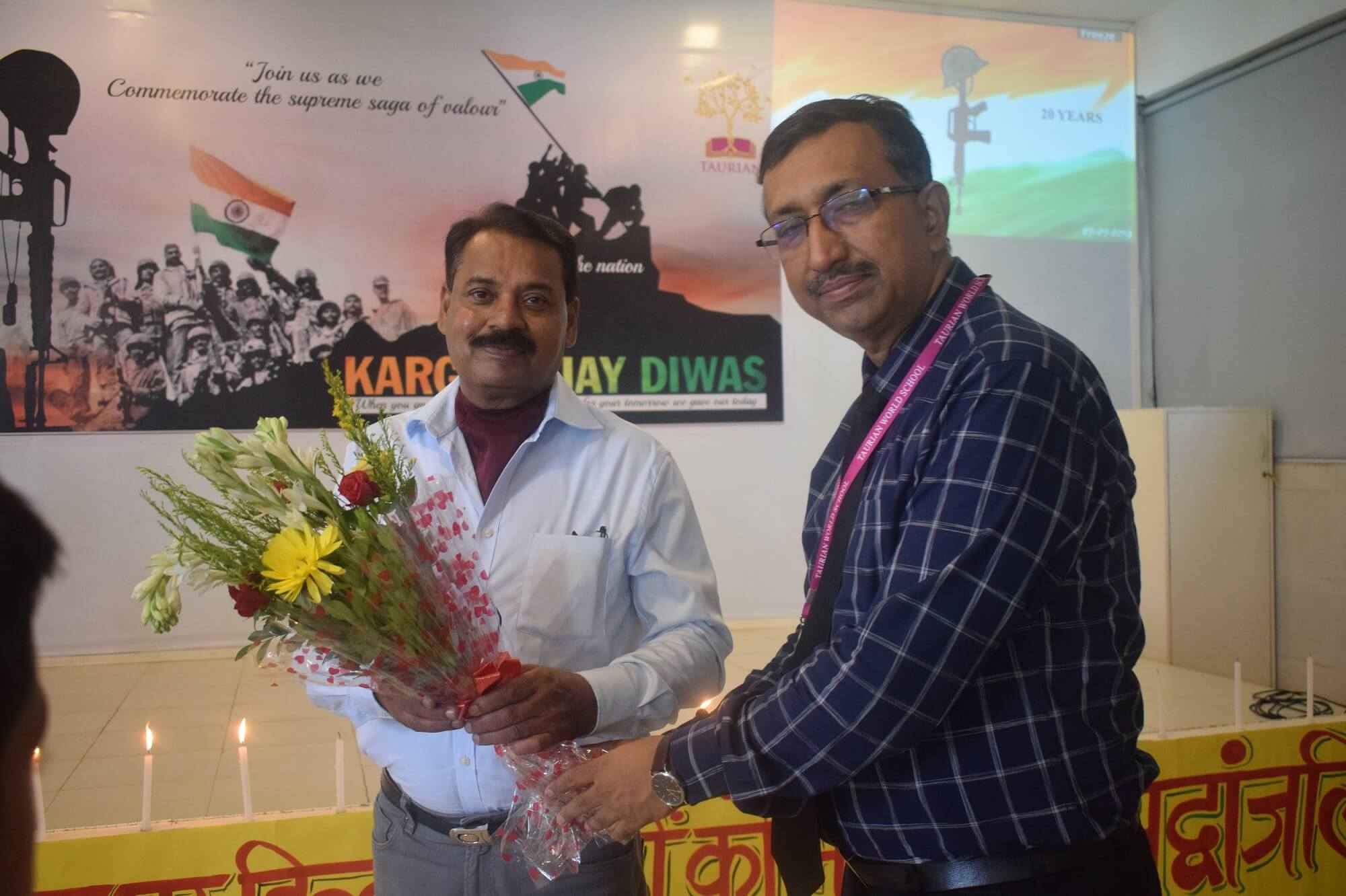 Kargil Vijay Diwas is named after the success of Operation Vijay. On this day, 26 July 1999, India successfully took command of the high outposts which had been lost to Pakistani intruders. A special assembly was organized by students of Grade VIII of Taurian World School on 26th July 2019, to pay tribute to the martyrs who sacrificed their life for the country.

We sleep in our houses without any tension as the soldiers are awake at the borders to ensure our safety. Kargil Vijay Diwas is both a pride inducing moment and a prick in the hearts of millions. It is an important day for every Indian regardless of religion, class, creed or race. Thousands of soldiers bravely fought for our country and gave their lives to successfully take command of the high outposts of Kargil Drass Sector.

The Chief Guest on the occasion was none other than the proud child of Mother India Col. Pradeep Singh Bhatnagar who himself was part of the Kargil Operation. He was an Infantry Commando from Mahar Regiment who served on all possible Borders with Pakistan & China for over 3 decades. Having a very distinguished , accomplished  & satisfying innings with Indian Army, holding very coveted & independent assignments he said that he wants to be a Commando of the Indian Army in every birth. Becoming emotional during his speech he shared his experience during the Kargil War.

The assembly started with lighting of candles to pay tribute to the Indian soldiers who lost their lives in the Kargil war followed by a prayer song. Ananya of Grade IV enthralled the audience with a patriotic song, emphasising on the value of peace in our lives. A group of students amazed the audience by a scintillating dance performance on the song “Maa Tujhe Salam” depicting patriotic fervour and the strong feeling of unity and brotherhood amongst the people of our country. A video was also played which portrayed the incidents that led to Kargil War and how India emerged as a winner.

The Assembly concluded with the singing of the National Anthem by the audience which had immense love for their country in their hearts.

This assembly truly highlighted the spirit of valour and sacrifice made by the soldiers. It sensitized the students to remember and appreciate the contribution of the courageous Indian Army in protecting our nation.

Photos and Videos can be accessed here. https://drive.google.com/drive/folders/1q_r7Do_9VBrKn77LexuUUxEubLByKjlh?usp=sharing